Welcome to the first devlog of the Tanks VR. We felt like we needed a central place to post regular updates about the development of the game, instead of just posting pictures in the Discord group. Since the testing week, a lot of things have been improved and added.

Improved character tracking
Previously the characters of players in other tanks would sit up straight and only their arms and heads would be able to move. Now the spine is able to move, giving a much more realistic representation of the movement of players in other tanks. Below are gifs of the character tracking before and after the improvement. Aside from character tracking looking a lot better now, we think this improved character tracking will also improve gameplay. You can now more clearly see what an enemy player is doing in his tank. For example, if he is bent forward looking through his scope (the scope will be discussed later in this devlog) with his barrel pointed towards you, you'll be certain that he's aiming for you.

Armor penetration system
We felt like the gameplay needed to be improved before releaseing the game as Early Access on Steam. Therefore we decided to implement the armor penetration system. Such a system is widely used in strategic tank games. It requires players to aim carefully when shooting at other tanks and forces players to position their tanks in such a way that incoming shells are more likely to ricochet.

The old system was very simple: When a shell hits a tank, damage would be registered. A good armor penetration system takes the shell velocity, impact angle and armor thickness into account. This is exactly what we have now implemented in Tanks VR. The picture below shows how an incoming shell ricochets on a 25 mm armor plate. This shell would penetrate the plate if the impact angle is larger than shown.

Each tank has unique varying armor thicknesses, giving them different advantages and disadvantages in certain tactical situations. A representation of the armor thickness for the armor plates of the currently implemented tanks are shown below. Keep in mind that green means strong (thick) armor and red means weak (thin) armor. 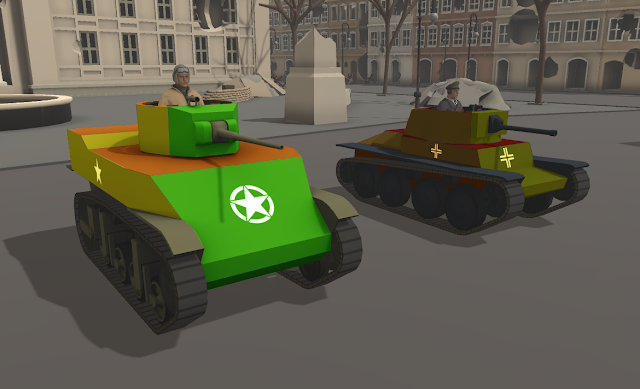 In real guns, there is always randomness to where the shots land. This follows a so called "normal distribution". We have now added a normally distributed spread to the shooting of shells. This introduces new gameplay mechanics, as it makes long-distance shots more inaccurate. It introduces a randomness to the gameplay, which requires the players to react accordingly. The picture below gives an example of the normal distribution of hits. 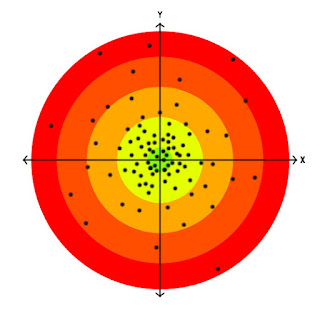 It can be seen that most hits are near the center, and the further away from the center, the less hits. So sometimes the player will get very unlucky with an inaccurate shot, but most of the shots will be close to the center of the target. Careful aiming becomes more and more important, which brings us to the next feature.

From the feedback of several testers, it became clear that a method of better aiming was desired. Therefore we now introduce a scope to the tank. This will make it easier to line up far-away shots. The reticle of the scope allows for adjusting for the "bullet drop", caused by gravity acting on shells.

Aside from the scope, we have added color gradients to all the gauges and knobs. This gives a more clear reading of the current tank speed, tank damage and radio volume. So you'll instantly know the state of your tank by quickly glancing down.

The driving levers next to the chair both have a "deadzone", a small zone in the rotation of the levers where the tank doesn't react to user input. This makes it easier to stop the tank. Several testers made it clear that it is difficult to find this deadzone while in the heat of battle. Therefore it was required to give the player feedback on whether a lever is in a deadzone or not. This was done by making the controller vibrate stonger when the lever is outside of the deadzone than when the lever is within the deadzone. See the diagram below as clarification. 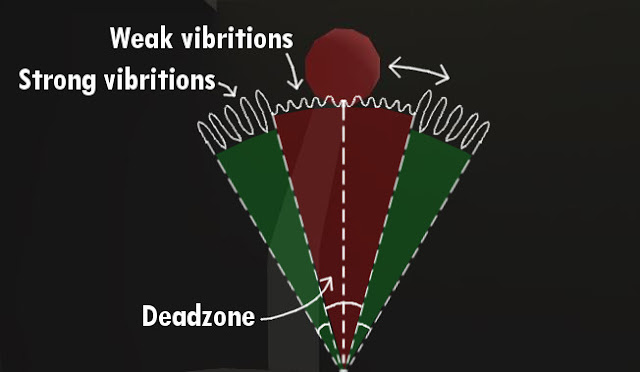 We have added lobby owner symbols, ready/not ready symbols as well as a ready button. This gives the lobby owner more information about the state of the other players inside the lobby.

We have added several gameplay UI elements, such as friendly player nameplates, a game duration timer and two countdown timers that signal the start and end of the game. The name of a friendly  player is displayed above their head, as seen in the picture below.

We have added a maximum match duration of 10 minutes. This will give a time pressure to the game. The current match time will be displayed above the objective symbol, as can be seen in the picture below. In this case, the time left is 7 minutes and 30 seconds.

When a player joins a game, a countdown timer is shown directly in front their tank. During this countdown till the start of the game, players won't be able to drive their tank. This makes sure that players that take longer to load a scene won't be at a disadvantage.

At the end of the game, a countdown timer is displayed in front of the tank of the players to signal when they will be returned to the garage. This will make the transition to the garage less abrupt, as testers probably experienced during the testing week.

That brings us to the next improvement:

During the testing week, scene transitions were abrupt. The screen froze and suddenly you were standing in the garage, or you were sitting in a tank. Scenes will now transition smoothly, fading out to black to load the next scene and fading back in when the new scene is loaded.

Steam, Early Access release date and testing!
So the Tanks VR build is now uploaded to Steam and is currently undergoing a reviewing process. Our aim was to release Tanks VR for Early Access at the end of March, however due to all the improvements we have been working on, the release will be postponed till one week later. The release date is now set to be April 6th 2018! Before releasing, we will organize one last testing night. We will inform the testers as soon as possible.

Popular posts from this blog

We're happy to say that Tanks VR is still growing and that many players have given Tanks VR a review on Steam, all of which were positive! We expect that this will give people that are interested in the game more confidence that Tanks VR will take off! HMD support Many people have requested Oculus support. We are happy to say the we have now been accepted to the Oculus Start developer program! This will provide us with an Oculus somewhere in the beginning of May. We can then add official Oculus support, which would not take long. Some players have already tried the game with the Oculus and have reported that it works fine. However, we do not recommend you do this as we can't help you if you experience any Oculus specific problem. Several people have requested Windows Mixed Reality (WMR) support. We are currently looking into acquiring a WMR HMD. Keep an eye out for announcements about this. Just like with the Oculus, some people with a WMR HMD have tried the game a
Read more

In the previous devlog we talked about implementing 3D in-game voice chat in a large content update. Due to various requests to implement it sooner, we decided to do just that. We also felt that we needed some kind of singleplayer feature in the game, in order to provide new players and reviewers a way to try out the game, even if there is no one online. We'll also discuss Windows Mixed Reality (WMR) support. So let's get to it! Practice mode So singleplayer practice mode places you in the "city" map, where you're surrounded by a lot of explosive barrels. Shooting the barrels will make them blow up. We think it's a good way for new players to get a hang of the in-game controls. It's also a way for more experienced players to kill some time when waiting for other players to come online! Shooting some highly explosive barrels in the practice mode! We would like to give practice mode a bit more depth in the future, by possibly introducing a
Read more